The following excerpt is from Mother Jones Magazine, the JAN/FEB issue, of 2017, written by Kristina Rizga: https://www.motherjones.com/politics/2017/02/civics-education-trump-bullying/
Advocates for the public education system argued that the unique American experiment wouldn’t work without it—that schools were the most effective mechanism for instilling civic values such as abandoning unrestrained self-interest and opposing bigotry.
Until the late ’60s, three different courses in civic studies were common in American high schools, and they often focused on helping students apply the dry mechanics of government to solving problems in their own communities. Many social studies classes also aimed to highlight the fragility of the democratic process and the historic importance of civic engagement.
True, these classes were often heavy on jingoism and light on people of color, women, and LGBT communities, but that in itself prompted a civics lesson: a powerful movement for ethnic and gender studies that continues to expand.
But all that changed most notably in the 1980s, when, in addition to earlier cuts in civic studies, policymakers began shifting the focus from social studies toward easily testable subjects like math and reading. As Stanford University’s David F. Labaree argued in his intellectual history of American education, Someone Has to Fail, schools abandoned their civic mission in favor of preparing a new generation of skilled workers. The No Child Left Behind Act later accelerated this push, drawing on the work of a Reagan-era commission that postulated (with scant evidence) that test scores in reading and math would predict college and workplace performance.
In 2011, all federal funding for civics and social studies was eliminated. Some state and local funding dropped, too, forcing many cash-strapped districts to prioritize math and English—the subjects most prominently featured in standardized tests.

Check out our CHiPS brochure.

CHiPS in the News! 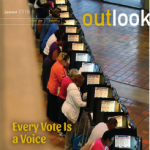